The most recent meeting of Utrique Fidelis Mon Mark Grand Officers Lodge held at Stroud on May 15th was momentous for several reasons:

First, it was the first time that the lodge had met at a venue outside of the Province of Monmouthshire.

Second, we were the recipients of an informative talk on the work of the Severn Area Rescue Association (SARA).

Third and most importantly, a perpetual Past Master’s Jewel was generously donated to the Lodge by Mrs Beryl Cavell, wife of the late R.W Bro Norman Cavell, Past Provincial Grand Master of the Mark Province of Bristol. 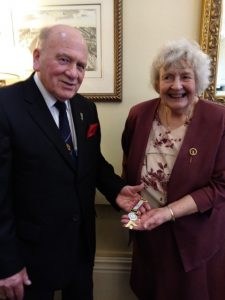 The meeting was supported by Grand Officers from Monmouthshire, Bristol, Somerset, Gloucestershire and Herefordshire and South Wales.

Autumn 2016 saw the announcement from London of the intention of MMH to hold a charity walk on behalf of the MBF in London in May of 2017.  Provinces were invited to submit teams of walkers to undertake a 7-8 mile walk around the parks of central London.

The Deputy PGM of Monmouthshire lost the deciding arm wrestling match with the PGM and was charged with the task of putting together a team and making arrangements. The team ultimately proved to be W.Bro Phil Sefton, ProvGSec.  W.Bro Terry Sefton, ProvGMO and W.Bro Tim Huckle ProvGInsWks. The time fast approached and was upon us before we knew it.

We met on Friday pm of May 5th at Newport station and apart from the DPGM splitting his trousers, arrived without incident at the Travel Lodge at Waterloo road by mid evening.  After a curry and restorative sweet sherry, we discussed tactics for the following day. No barging, kicking, tripping or throwing of energetic walkers into the serpentine was to be allowed…. Although it is to be noted that R.W Bro Martin Wilson of Sussex was shunted sideways into a patch of nettles and scrub when he rashly tried to overtake …. On the inside!

We assembled At 9:30 on the sixth at MMH; got signed in; had the riot act read; then the last rites; and then assembled in the Grand Temple to be issued with the Hi Viz vest.  Naturally, Mon DPGM’s did not fit.  He has kindly donated his to PGM in readiness for presentation to the next Provincial Car Park Attendant.  10:30 signalled commencement, and off we processed in alphabetical order of provinces.

The weather was good, the scenery was excellent, the banter and camaraderie all that one would expect from a Mark event. The conduct of the walkers was generally good except for the team from Durham who leapt on me from the bushes and relieved me of my anchovy paste sandwiches.  I would recognise Danny Guy – anywhere.  The Sefton brothers suddenly turned into Olympic distance walkers and zoomed off into the distance leaving W.Bro Tim and I choking in their dust strewn wake. However we ploughed our own furrow and made steady progress.

As the miles went by we loosened up a bit and aside from sore feet the walk passed by in sunshine and conversation. There was a flutter of consternation from the provinces of Devon, Herts, Leicester and Hants IOW as we overhauled them successfully in the latter stages of the Hyde Park stretch (no one wants to be overtaken by the fat bloke). We arrived back at MMH at 13:10 about 2 ½ hours after setting off. A tremendous effort. The Monmouthshire team reunited, signed back in…. thus preventing the need for a search party to be sent out and we repaired to the bar for a restorative glass of lemonade followed by a first class buffet.

In conclusion: a most enjoyable day at MMH and a super weekend with my Mon Mark brothers who were fabulous company, the spirit was tremendous and I thank them warmly for their effort , commitment and selfless use of their own resources in the support of the walk launched by MMH. The Mark Province of Monmouthshire has sent £3,500 in acknowledgement of our efforts. The overall amount raised has been £350.000 so far. I think you will agree that this has been a very successful venture.

In the picture below we see Mon DPGM being clapped in by MMH staff relieved at not having to carry him up the stairs. 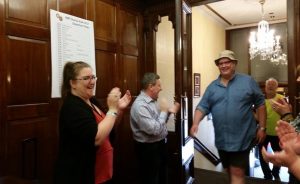 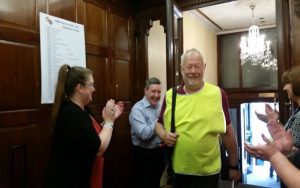 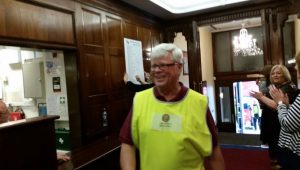 W.Bro Terry Sefton photo bombing his brother…. Because he could! 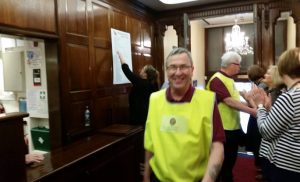