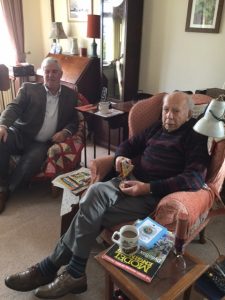 PGM chating with VWBro. Derek Straker Moxley J.P. , PastDepPGM of the Mark in Monmouthshire after presenting him with his Grand Patron Gold Collar award at his home in Swindon.

VWBro Derek joined the Mark Degree in 1950 becoming Deputy ProvGMaster in 1972 retiring in 1980.

For many years he was a Draper in Abertillery before retiring  to Yeovil where he took a great interest in helping to restore old airplanes.  This included making various parts for them.

It was VWBro Derek who first brought the Benevolent Fund into Monmouthshire. 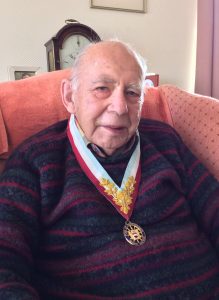 Aged 92 yrs he is as bright and sharp as a pin although lacking a little in Mobility.  We wish him and his good lady many many more years of health and enjoyment.