The question of the provision of a Provincial Grand Master’s apron for the future Provincial Grand Master had been touched upon on numerous occasions with senior members of the executive over the last two to three years. A particularly sensitive issue within the Province as the only one in our possession, previously worn by RW Bro. Frederick Mansell Gabb (1990-1996) was quite old and in very poor condition.

However, a short while ago I managed to track down the apron worn by RW Bro. Brian Charles Cull who had served the Province from 1996 to 2006.

It may not be generally known, that whilst as an act of courtesy a retiring Provincial Grand Master is invited to submit three names as his successor for consideration, Grand Lodge are the sole arbiter of the selection process. So, after informing the Grand Secretary of my intention to stand down immediately prior to our Provincial Meeting in June my thoughts soon turned to how the apron should be presented to my successor, no matter who, and when.

The decision to hold a Celebratory Mark Advancement ceremony at Maius Lodge in January in the magnificently refurbished temple in Risca Masonic Hall provided the opportunity to do something a little different. Initially it was to be a straightforward presentation either within the temple or at the festive board. But having worked closely with VW Bro. David Powell for almost 5 years I knew he would appreciate something a little different.

So, the idea of a raffle was born. Disguised as a box of redundant Christmas Crackers the “booby prize” was duly “won” by the Deputy Provincial Grand Master. Probably another first for the Province of Monmouthshire, the first time a Provincial Grand Master’s Apron and Collar have ever been won in a raffle, something I’m sure my successor will always remember. 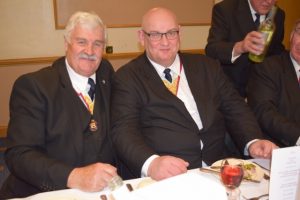 Following the first Mark meeting of the year at Risca, which was to celebrate the refurbishment of the Temple at Risca Masonic Hall, the PGM, RW Bro. Derek Thomas, announced his retirement.

This surprise news came following the Advancement of Bro. Wilfred Chivers by the PGM himself, who was ably assisted by the team that carried out multiple Advancements whilst at Bucharest in July 2017.

He explained that this meeting, the first of the year, was the appropriate one at which to make his announcement. The Maius Lodge of MMM is his Mother Lodge and he recalled that his first involvement with masonry was at the age of 11, helping to lay tables in the Risca Masonic Hall.

An impressive array of distinguished brethren were at the meeting, including the PGM of Craft in Monmouthshire, RW Bro. Richard Davies. He gave much praise for RW Bro Derek, when responding to the Visitors Toast and talked of his pleasure of the close relationships that had been developed within the principal masonic groups within our Province.

Following his announcement the PGM was pleased to confirm that his recommendation had been agreed by Grand Lodge, and that his successor will be the Deputy PGM, VW David Powell.

Whilst there was a general disappointment that RW Bro. Derek was standing down, all were very pleased that VW Bro David was to take over.

VW Bro David spoke about the continuation of the policies that RW Bro Derek and he have formulated during the last 4 years. These have proved to be very successful in promoting the Mark, not only within Monmouthshire, but also, via The Mark Internet Lodge, to other areas of the world including Romania.

He finished by expressing his pleasure to receive such a promotion, but that will happen in June, and in the meantime there was still much to do under the leadership of RW Bro Derek.