On Friday 2nd March I was thrilled to attend an extraordinarily meeting of The Mark Internet Lodge, held at the Ramada Nord Hotel Bucharest in which a further 42 brethren were advanced into the Mark Degree.

I was then invited to accept the gavel in order to undertake a quite unique ceremony.  To “Confer the Secrets of the Chair” on Bro. Radu Balanescu, Grand Master of the National Grand Lodge of Romania and Bro. Razvan Buzatu his Grand Chancellor.

The following day, Saturday 3rd March, I was then privelaged to witness and participate in the Consecration of the first Lodge of Mark Master Masons in Romania.  The new lodge is the Alexandru Vaida-Voevod Lodge No. 1988, and W Bro. Florian Birlea was installed as the Primus Master. 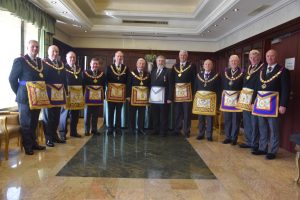 More excitement was to follow as at the end of the meeting the Deputy Grand Master, RW Bro. John Prizeman announced the appointment of W Bro. Radu Balanescu as Past Grand Junior Warden, so his style and title is now RW Bro.

But the icing on the cake was to happen later at the Gala Dinner.  The children of a local orphanage gave an enchanting display of folk dancing and singing.  Afterwards when thanking the children and staff it became apparent that due to a recent cut in state funding the orphanage was in severe financial straits. 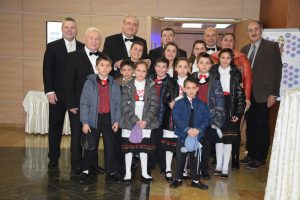 A discussion amongst the senior representatives present from Mark Grand Lodge led to the Deputy Grand Master announcing to the ladies and brethren present that the Mark Benevolent Fund would make an immediate grant of £10,000 available.

The Worshipful Master, Officers and brethren of The Mark Internet Lodge then made it known that the alms collection taken at the advancement ceremony would also be presented to the orphanage.

Just to complete the story on my return home, and following a series of brief telephone calls to the executive it has been decided that the Mark Province of Monmouthshire will make a further £1000 available, the intention being to make this presentation in person on my return to Romania in April.