The Petition for the Traian Vuia Lodge No. 2010 has now been approved by the MW Grand Master and it will be consecrated in Timisoara, which is approximately 340 miles north west of Bucharest on Saturday 25th May.

Plans are also well advanced for the formation of what will be the sixth Lodge of Mark Master Masons in Romania, to be titled the Mihai Cristea Lodge, in Sibiu on the 13th July. We anticipate that the Petition be submitted to Grand Lodge towards the end of May.

Following which we plan to return to Bucharest in late October for TMIL to possibly undertake an advancement ceremony immediately prior to the consecration of another Mark Lodge. We anticipate that the following day the seven Mark Lodges, currently unattached, will be formed into an Inspectorate. 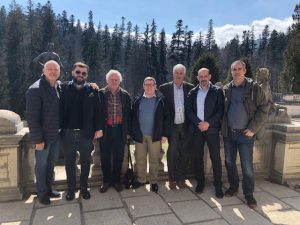 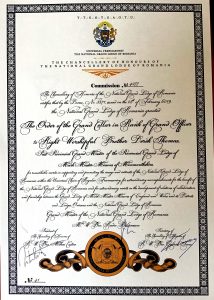 There were over 600 brethren present at the meeting chaired by the Grand Master MW Bro. Radu Balanescu including no fewer than 24 Grand Masters from literally all over the world such as Japan, Brazil, Russia, Poland, Italy and Holland.
During the course of his address the Grand Master outlined the progress being made with the introduction of the Mark Degree and strongly recommended that the brethren consider joining the Order.

At the conclusion of his address he honoured RW Bro Derek and RW Bro Ryan with The Order of the Grand Collar in the Rank of Grand Officer in recognition of their hard work and dedication in establishing the Mark Degree in Romania.

A Gala Dinner in the evening at which over 700 brethren and ladies were present completed a very busy but enjoyable day.

On Sunday 9th June, Torfaen Lodge MMM 796, held a Cream Tea and Trains charity event at the Worshipful Master’s garden railway. Some 50 members, friends, family and 2 very well-behaved dogs attended on a lovely sunny afternoon, with flowers in profusion.
Wye Valley Railway Society, who previously operated the miniature railway at Tintern old Station for over 35 years, ran a coal fired steam locomotive and an electric locomotive which were very busy giving rides all afternoon. These were augmented by a radio-controlled electric locomotive with scale sit on carriages and a radio-controlled shunter hauling a demonstration goods train.
Visitors travelled from as far afield as Oxfordshire and Somerset.
The event raised  £681 for Mark Masonic charities.
Afterwards, tired but happy helpers retired to the Royal Oak who had kindly made their carpark available for the event.